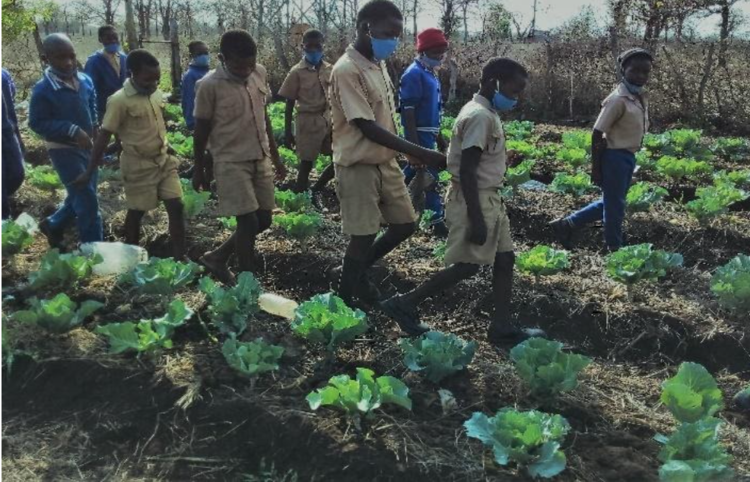 About the author: Edson Dongo is a Teach for Zimbabwe alumni and primary school teacher who has started a club called Learners In Fight against climate change. 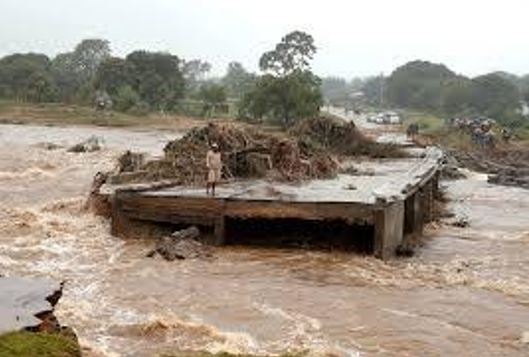 Above is a picture that was taken in 2019 during the cyclone Idai in Chimanimani Zimbabwe, evident enough that climate change is here to stay.

Zimbabwe is a country endowed with a plethora of natural resources and a good climate for agricultural production. However, it is among countries that are struggling to cope with the effects of climate change, especially in its marginalised areas where the majority of Zimbabweans live. Prominent effects of climate change are already showing up in Zimbabwe with the intense variability of its rainfall patterns which makes it quite difficult to predict the availability of water for human and agricultural activities. There has also been a total shift of seasons which has affected the onset and end of farming season in general. Moreover, longer mid-season dry spells also mean that groundwater recharge has been reduced. The impact of these factors is seen from how natural farming seasons are being affected due to such temporal changes. Even diseases like Malaria, Cholera, and Typhoid are now at an increase due to these factors. 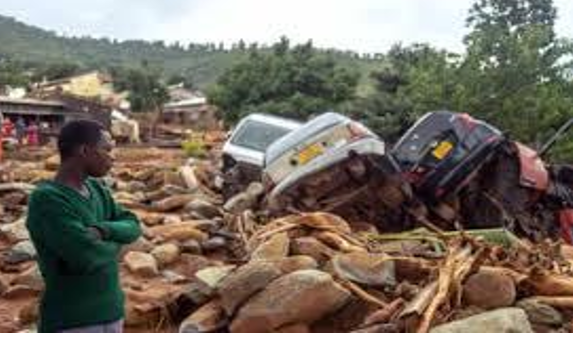 Picture showing a stunned survivor from the devastating effects of cyclone Idai, Chimaniman.[1]

Droughts have occurred for quite a long time, coupled with flooding that has left a trail of destruction for the marginalized populace. Another side effect is that wildlife is being forced to encroach on human settlements, threatening food production and people’s livelihoods. Furthermore, rural communities in the South West of Zimbabwe are under the threat of disappearing groundwater tables affecting agricultural systems. In terms of the climate situation, the high temperatures also mean that increases in pests and diseases are prevalent. Undoubtedly, climate change is affecting the resilience of rural people as women and children are now being forced to walk unimaginable distances just to fetch food and firewood.

The dynamism in global environmental ecosystems, climatic variations and the change in human behavior has meant that society needs to re-align its thinking to a sustainable focus more than ever before. Therefore, it is paramount to teach the next generation climate education to alleviate the problems caused by the increasing pressure on ecosystems as they are now the custodians of this universe. They need to understand the new evolving dynamism in climate change and the way to adapt to future trends. It is vital for them to become conservation fanatics who understand the emergency of environmental responsibility as, without it, the earth cannot sustain life in all its forms.

Climate education goes far beyond the classroom walls; it exposes learners to real life experiences they can adopt to improve mother earth. I think it also provides them with the survival skills they need to be able to face tomorrow with positivity and hope.

Furthermore, there is an interdependence between human beings and climate where the latter is a vehicle that moves life ecosystems, supports agriculture and social cultural activities depend on it to the extent that it is our survival and yet little emphasis is put on it. Humanity and climate are intertwined; therefore learners need to be given the practical sense of climate education. I personally think this kind of first-hand experience allows learners to make personal and more profound connections between climate issues and their way of life. I also think climate education helps to balance between the environment and societal needs. The next generation must be aware of climate conscious systems of production and health habits that do not compromise the earth support systems. When it comes to building a greener future good business practices are to be maintained, therefore it makes climate-focused business education important. The ego-centric nature of man that made him superior over everything on earth has meant that the idea of a Blue and Green economy will materialise at a slower pace. If we educate the learners at an early stage the results will be quickly achieved; children will carry the seeds of change in them as it is a natural gift.

Climate education will also improve on sustainable life skills, it encourages learners to redesign their relationship with the ecosystem and develop eco-friendly skills and habits for their future. Learners will learn to conserve resources, grow their own food in a sustainable way and choose wisely their future pathway. 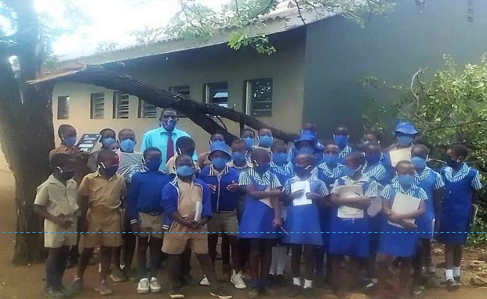 Picture above showing Club members standing beside a tree that almost destroy our computer laboratory (effects of climate change, harsh winds brought down the tree).

Lack of climate change education is one root cause of the unbearably slow expansion of climate change awareness among children. If learners in the past were taught climate change education in schools, we would be talking about a different story altogether. I started this club with the idea that in Zimbabwe, the majority of our schools are not teaching climate education regardless of the fact that the country is already experiencing a global catastrophe. The majority of our rural population is currently below the age of sixteen, meaning that they are of school-going age. Hence, I was interested in starting this club hoping that it would spread to all the parts of the marginalized areas of Zimbabwe. Although the curriculum was reviewed to include some of the climate change issues, it still lacks an in-depth and practical approach to climate change issues as the teachers are not equipped with the required information to make a significant change to learners.

Even though it seems obvious that climate education is important, it is still not properly addressed in schools. It is very clear that the majority of learners do not really understand the urgency of the climate crisis and those that do know are simply not equipped enough to act on the understanding. As a teacher experiencing this reality, I wanted to look for resources and ideas to learn about the climate crisis and work in climate advocacy to empower learners to make a difference in their community.

I also want to be part of a winning global team fighting carbon emissions to zero and to produce this generation of leaders. We also need to take up climate change education in schools. Spearheading the green learning agenda therefore is my priority as an educator, leading a new way of educating and engaging learners, youth, and adults in climate solutions. Another reason for starting this club is that in the eye of my mind, I visualize learners as people who have immense potential to learn things and to act as agents of change using skills acquired at school which I aim to impart to them. I hope that they can use this knowledge for the betterment of their community and for the nation at large.

I also believe that climate change education can be used as a way of combating gender injustice especially to the girl child in these marginalized areas where they are considered of lesser value than the boy counterpart. Proper climate change education can help empower girls and the youth to become powerful change agents by sustainability paving new paths for what life can be like. Learners need to appreciate the causes of climate change and also learn a set of skills that allow them to apply their climate knowledge in the real world including problem-solving, critical thinking, teamwork, coping with the unpredictability of life, empathy, and the ability to negotiate.

What we have done as a club so far 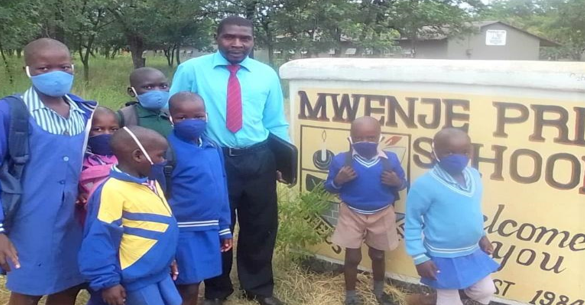 Mwenje Primary school is a school that takes conservation and environmental issues seriously, its layout and architecture blends well with the local ecosystem. The paint that was used on buildings does not pose harm to the flora and fauna around the school, the water system is powered by solar energy which is a renewable source of energy and there is also a water harvesting facility that supplements water requirements during the dry spells. The LIFACC club has done a number of projects and activities to compliment the efforts done by the school administration in order to maintain a natural health ecosystem.

Reusing/recycling of empty plastic bottles
There was a problem with littering at our local business area, a lot of empty plastic beer bottles where being thrown everywhere causing aesthetic pollution. Sometimes the shop owners would also burn the empty containers causing air pollution. The club had to go to the area to collect the litter and then, the plastic bottles were filled with soil and used as ornaments for the school flower beds.

We started clean-up campaigns at school and around the business center, this is also in line with the President`s initiative of clean-up exercises every first Friday of the month. Clean-up campaigns raise awareness about the scale of the litter problem and get children about changing their behavior.. 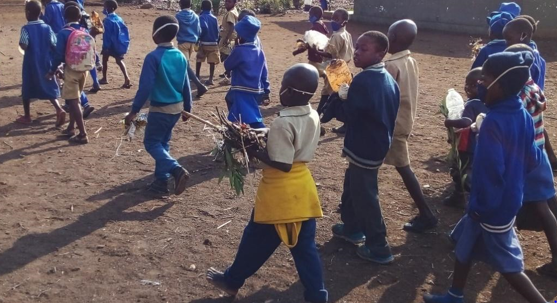 Climate action soldiers in action during a clean-up campaign.

The extinction of flora and fauna due to climate change has also been a cause for concern. Wildfires, floods, and unfavorable high temperatures are some of the causes for the extinction of plant and animal species. This has prompted the conservation club to create a seed bank with more than 500 seeds of different plants. 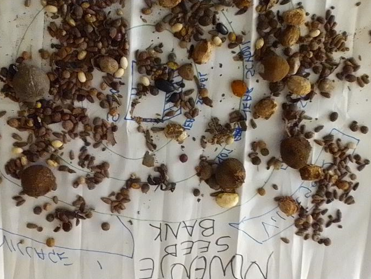 Conservation agriculture is a sustainable approach to agricultural production which aims to protect soil from erosion and degradation, improving its quality and biodiversity to contribute to the preservation of natural resources whilst also optimizing yields. This type of agriculture is based on three principles that are minimum soil disturbances, maintenance of natural soil cover and use of crop rotations with a diversity of crop varieties. 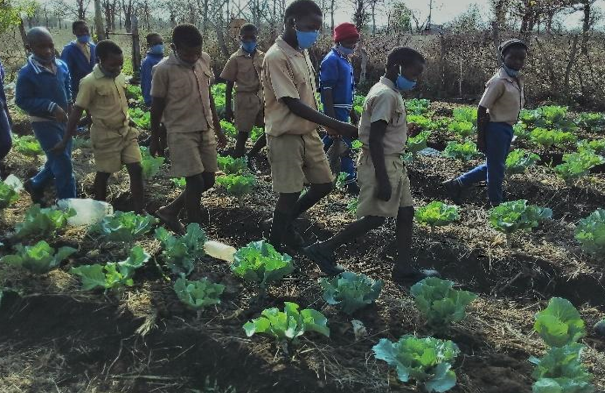 The environmental benefits of this farming method include, improvement of soil properties, increase of biodiversity, less carbon emissions, increased carbon sequestration, less contamination of downstream water, reduction of floods and landslides. All the above benefits have led us to implement conservation agriculture at our agricultural garden and school fields. 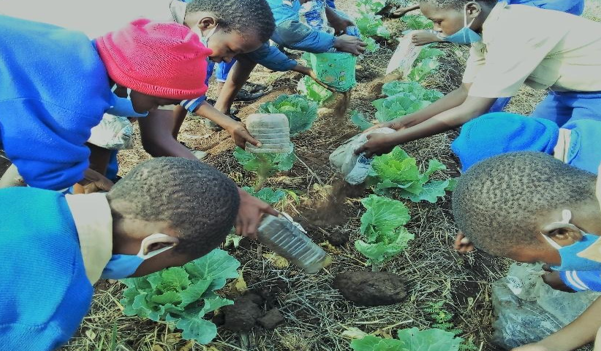 Part of the club members manuring their sweet cabbage

One of the earliest and easiest known preservation methods is drying. For areas located in the hottest part of the country, maintaining vegetables for a long time in the garden can be a problem. Even families need vegetables to satisfy their dietary requirements hence, the need to teach learners methods of drying vegetables without completely removing the nutrients is important.

Learners were very enthusiastic about carrying out the school beautifying project as they made something very presentable out of something seemingly useless. In this case, empty plastic containers were turned into beautifying objects for the school. The learners achieved great results by cleaning up the environment (picking up the discarded plastic bottles) while also using them to ornament school premises.

Teaching learners about conservation agriculture creates a mind-set that focuses on the needs of communities and not just individuals. Such exposure helps learners recognize the value of experiences in the context of the way knowledge and skills are learned. Learners are quite interested in agriculture as they ask great questions about farming and potentially, they could even suggest wonderful solutions to farming problems.

In conservation agriculture, we are all about experiential learning. The learners get to know how to conserve moisture; scout for pests and diseases, touch and feel the texture of plants, pull and identify weeds. In all these circumstances, learners get to experience hands-on learning in an agricultural and educational environment.

Above is part of the garden put under intensive farming.

Food preservation began centuries ago and the methods have survived the test of time, modern day methods are only a modification of the traditional methods. Teaching children preservation has created a jovial atmosphere in the classroom and has also inculcated a renewed sense of responsibility in them